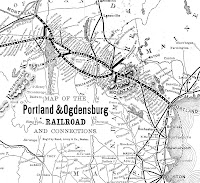 Built by the Portland & Ogdensburg Railroad between 1887 and 1888. The all-wood Bartlett Engine House with six stalls was home to helper locomotives that would assist heavy trains over the grade leading to Crawford Notch. The efficient railroad was instrumental in opening the White Mountains to tourism, logging and freight service. The P&O was acquired through lease by the Maine Central railroad in 1888. Besides transforming the region's economy, the railroad served a critical role in moving materials and supplies during World War I and World War II.

Bartlett Roundhouse, 1880's
The roundhouse was built to shelter and service steam locomotives. As steam was replaced by diesel locomotive technology in the early 1950's, the usefulness of the terminals like Bartlett began to fade. Plans were drawn up to replace the structure in 1951. Two stalls were demolished and the 17,500 gallon water tower were removed between 1951 and 1952. Plans to rebuild and replace the engine terminal were halted as freight and passenger service declined. 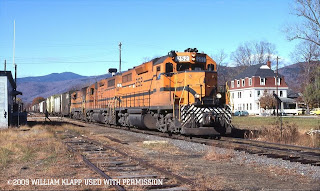 A Maine Central freight train charges through Bartlett in 1980.
By 1983, these tracks would fall silent. Photo by William Klapp. 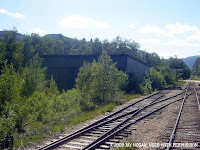 In June of 1958 the history of the roundhouse as a locomotive service facility ended and the building was closed and sold to the State of New Hampshire. From 1959 through the early 1980's the State Department of Transportation (DOT) used the building as a sand and salt shed. Many years of salt storage had the unfortunate side-effect of rotting the wallboards of Stall 4. The building fell into disuse. Meanwhile, the Maine Central became a part of Guilford Transportation Industries and the Mountain Division through Crawford Notch was abandoned in 1983. While the rails in Bartlett fell silent, the nearby Conway Scenic Railroad began seasonal tourist service on the former Boston & Maine branch out of North Conway in 1974. The seasonal trains returned to Bartlett years later, once again bringing activity to the rails just outside the roundhouse. 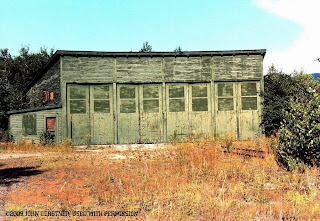 The abandoned Bartlett Roundhouse in 1987. Photo by John Gerstner. 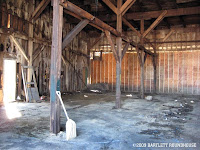 Over the last twenty-five years, the dormant and heavily vandalized building has stood at the edge of town, only a few feet from the active Conway Scenic Railroad mainline to Crawford Notch. The Bartlett Roundhouse Preservation Club was formed in March 2008 as an all-volunteer grassroots movement to evaluate and help recondition the historic structure for all to enjoy. The state granted the organization a limited use agreement that allows them to perform cleanup work and invite licensed contractors to evaluate the structure. The future of the historic roundhouse remains uncertain. Critical support beams have weakened under the weight of many New Hampshire winters and the roof as a whole needs to be replaced. The structure is still stable, but needs work if it is to survive. Without work done to the building to halt the decay, it will collapse within the next few years. 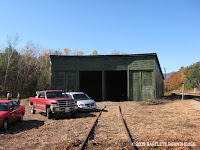 Help us preserve a unique part of New England railroad history and a forgotten part of White Mountains lore. Your donations of time, materials, services or artifacts will help us reach our goal. Please join today and help preserve the past in the present for the future! If you have questions about how to join our organization or any of our projects, please contact us.
at 9:53 AM

IMPORTANT: Please do not attempt to enter the Bartlett Roundhouse on your own. The structure remains the property of the New Hampshire Department of Transportation (NHDOT). Tours of the structure cannot be arranged at this time, due to ongoing structural rehabilitation. Please respect the property and enjoy the historic structure from a safe distance. Thank you.